We were featured in the latest Motorsport News publication! The article dives into the British F4 Championship and our ongoing work with the engines. Here’s a copy of the article… 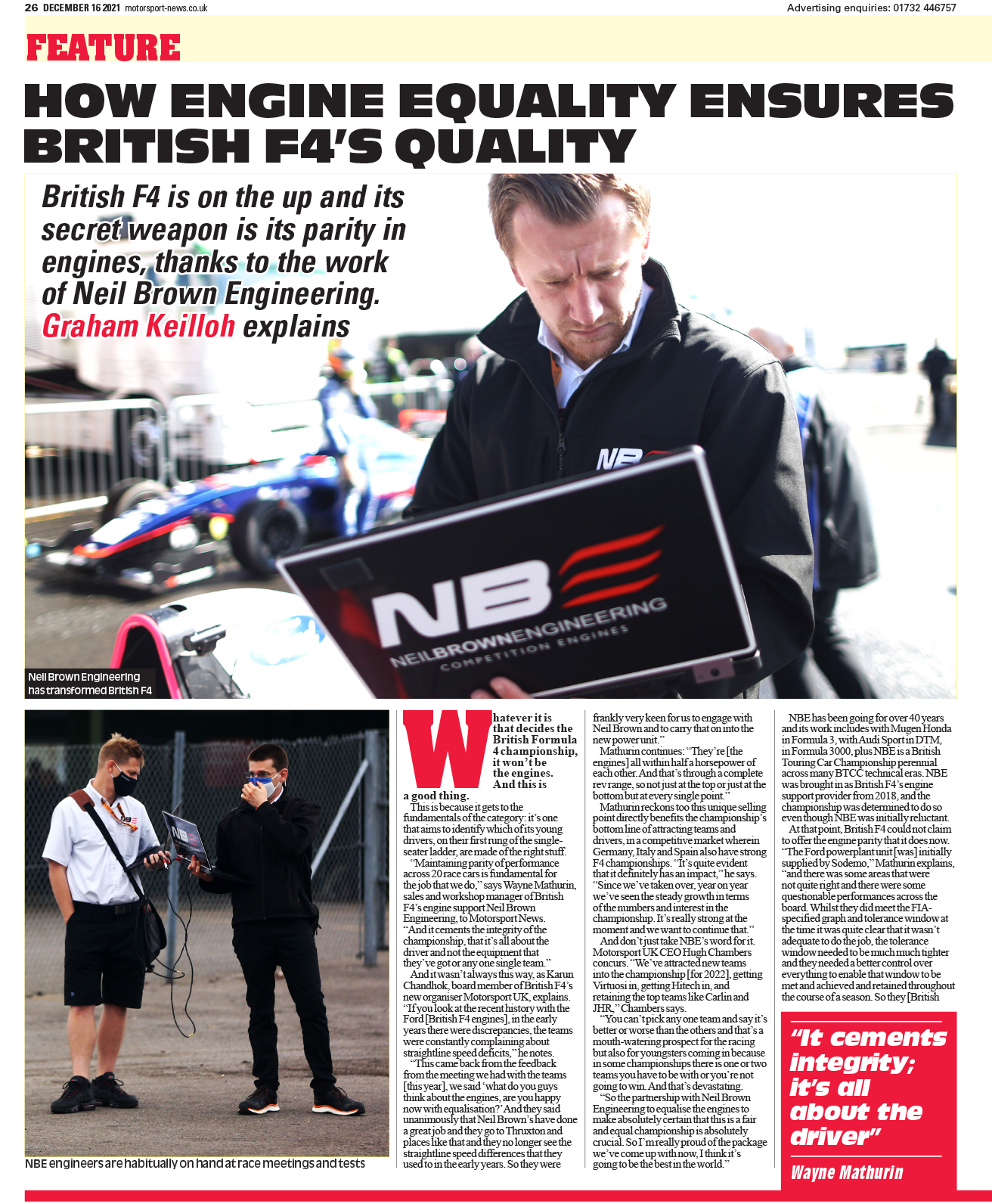 British F4 is on the up and its secret weapon is its parity in engines, thanks to the work of Neil Brown Engineering. Graham Keilloh explains.

Whatever it is that decides the British Formula 4 championship, it won’t be the engines. And this is a good thing. This is because it gets to the fundamentals of the category: it’s one that aims to identify which of its young drivers, on their first rung of the single- seater ladder, are made of the right stuff.

“Maintaining parity of performance across 20 race cars is fundamental for the job that we do,” says Wayne Mathurin, sales and workshop manager of British F4’s engine support Neil Brown Engineering, to Motorsport News. “And it cements the integrity of the championship, that it’s all about the driver and not the equipment that they’ve got or any one single team.” And it wasn’t always this way, as Karun Chandhok, board member of British F4’s new organiser Motorsport UK, explains. “If you look at the recent history with the Ford [British F4 engines], in the early years there were discrepancies, the teams were constantly complaining about straightline speed deficits,” he notes. “This came back from the feedback from the meeting we had with the teams [this year], we said ‘what do you guys think about the engines, are you happy now with equalisation?’ And they said unanimously that Neil Brown’s have done a great job and they go to Thruxton and places like that and they no longer see the straightline speed differences that they used to in the early years. So they were frankly very keen for us to engage with Neil Brown and to carry that on into the new power unit.”

Mathurin continues: “They’re [the engines] all within half a horsepower of each other. And that’s through a complete rev range, so not just at the top or just at the bottom but at every single point.” Mathurin reckons too this unique selling point directly benefits the championship’s bottom line of attracting teams and drivers, in a competitive market wherein Germany, Italy and Spain also have strong F4 championships. “It’s quite evident that it definitely has an impact,” he says. “Since we’ve taken over, year on year we’ve seen the steady growth in terms of the numbers and interest in the championship. It’s really strong at the moment and we want to continue that.”

And don’t just take NBE’s word for it. Motorsport UK CEO Hugh Chambers concurs. “We’ve attracted new teams into the championship [for 2022], getting Virtuosi in, getting Hitech in, and retaining the top teams like Carlin and JHR,” Chambers says.

“You can’t pick any one team and say it’s better or worse than the others and that’s a mouth-watering prospect for the racing but also for youngsters coming in because in some championships there is one or two teams you have to be with or you’re not going to win. And that’s devastating. “So the partnership with Neil Brown Engineering to equalise the engines to make absolutely certain that this is a fair and equal championship is absolutely crucial. So I’m really proud of the package we’ve come up with now, I think it’s going to be the best in the world.”

NBE has been going for over 40 years and its work includes with Mugen Honda in Formula 3, with Audi Sport in DTM, in Formula 3000, plus NBE is a British Touring Car Championship perennial across many BTCC technical eras. NBE was brought in as British F4’s engine support provider from 2018, and the championship was determined to do so even though NBE was initially reluctant. At that point, British F4 could not claim to offer the engine parity that it does now. “The Ford powerplant unit [was] initially supplied by Sodemo,” Mathurin explains, “and there was some areas that were not quite right and there were some questionable performances across the board.

Whilst they did meet the FIA- specified graph and tolerance window at the time it was quite clear that it wasn’t adequate to do the job, the tolerance window needed to be much much tighter and they needed a better control over everything to enable that window to be met and achieved and retained throughout the course of a season. 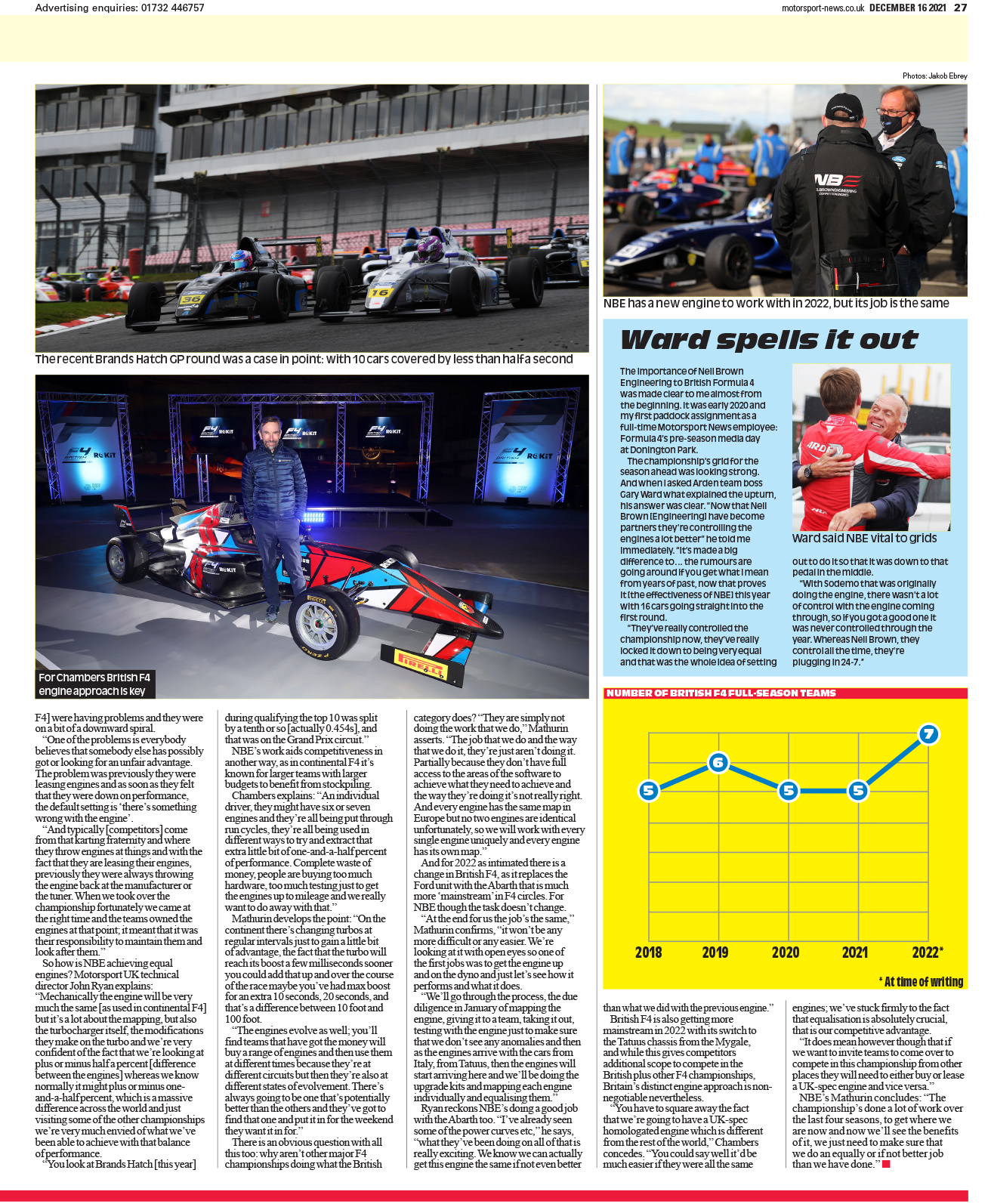 So they [British F4] were having problems and they were on a bit of a downward spiral. “One of the problems is everybody believes that somebody else has possibly got or looking for an unfair advantage. The problem was previously they were leasing engines and as soon as they felt that they were down on performance, the default setting is ‘there’s something wrong with the engine’.

“And typically [competitors] come from that karting fraternity and where they throw engines at things and with the fact that they are leasing their engines, previously they were always throwing the engine back at the manufacturer or the tuner. When we took over the championship fortunately we came at the right time and the teams owned the engines at that point; it meant that it was their responsibility to maintain them and look after them.”

“Mechanically the engine will be very much the same [as used in continental F4] but it’s a lot about the mapping, but also the turbocharger itself, the modifications they make on the turbo and we’re very confident of the fact that we’re looking at plus or minus half a percent [difference between the engines] whereas we know normally it might plus or minus one- and-a-half percent, which is a massive difference across the world and just visiting some of the other championships we’re very much envied of what we’ve been able to achieve with that balance of performance. “You look at Brands Hatch [this year] during qualifying the top 10 was split by a tenth or so [actually 0.454s], and that was on the Grand Prix circuit.” NBE’s work aids competitiveness in another way, as in continental F4 it’s known for larger teams with larger budgets to benefit from stockpiling. Chambers explains: “An individual driver, they might have six or seven engines and they’re all being put through run cycles, they’re all being used in different ways to try and extract that extra little bit of one-and-a-half percent of performance. Complete waste of money, people are buying too much hardware, too much testing just to get the engines up to mileage and we really want to do away with that.” Mathurin develops the point: “On the continent there’s changing turbos at regular intervals just to gain a little bit of advantage, the fact that the turbo will reach its boost a few milliseconds sooner you could add that up and over the course of the race maybe you’ve had max boost for an extra 10 seconds, 20 seconds, and that’s a difference between 10 foot and 100 foot.

“The engines evolve as well; you’ll find teams that have got the money will buy a range of engines and then use them at different times because they’re at different circuits but then they’re also at different states of evolvement. There’s always going to be one that’s potentially better than the others and they’ve got to find that one and put it in for the weekend they want it in for.”

There is an obvious question with all this too: why aren’t other major F4 championships doing what the British category does? “They are simply not doing the work that we do,” Mathurin asserts. “The job that we do and the way that we do it, they’re just aren’t doing it. Partially because they don’t have full access to the areas of the software to achieve what they need to achieve and the way they’re doing it’s not really right. And every engine has the same map in Europe but no two engines are identical unfortunately, so we will work with every single engine uniquely and every engine has its own map.”

And for 2022 as intimated there is a change in British F4, as it replaces the Ford unit with the Abarth that is much more ‘mainstream’ in F4 circles. For NBE though the task doesn’t change. “At the end for us the job’s the same,” Mathurin confirms, “it won’t be any more difficult or any easier. We’re looking at it with open eyes so one of the first jobs was to get the engine up and on the dyno and just let’s see how it performs and what it does.

“We’ll go through the process, the due diligence in January of mapping the engine, giving it to a team, taking it out, testing with the engine just to make sure that we don’t see any anomalies and then as the engines arrive with the cars from Italy, from Tatuus, then the engines will start arriving here and we’ll be doing the upgrade kits and mapping each engine individually and equalising them.”

Ryan reckons NBE’s doing a good job with the Abarth too. “I’ve already seen some of the power curves etc,” he says, “what they’ve been doing on all of that is really exciting. We know we can actually get this engine the same if not even better than what we did with the previous engine.” British F4 is also getting more mainstream in 2022 with its switch to the Tatuus chassis from the Mygale, and while this gives competitors additional scope to compete in the British plus other F4 championships, Britain’s distinct engine approach is non- negotiable nevertheless.

“You have to square away the fact that we’re going to have a UK-spec homologated engine which is different from the rest of the world,” Chambers concedes. “You could say well it’d be much easier if they were all the same engines; we’ve stuck firmly to the fact that equalisation is absolutely crucial, that is our competitive advantage. “It does mean however though that if we want to invite teams to come over to compete in this championship from other places they will need to either buy or lease a UK-spec engine and vice versa.” NBE’s Mathurin concludes: “The championship’s done a lot of work over the last four seasons, to get where we are now and now we’ll see the benefits of it, we just need to make sure that we do an equally or if not better job than we have done."

Ward spells it out The importance of Neil Brown Engineering to British Formula 4 was made clear to me almost from the beginning. It was early 2020 and my first paddock assignment as a full-time Motorsport News employee: Formula 4’s pre-season media day at Donington Park.

The championship’s grid for the season ahead was looking strong. And when I asked Arden team boss Gary Ward what explained the upturn, his answer was clear. “Now that Neil Brown [Engineering] have become partners they’re controlling the engines a lot better” he told me immediately. “It’s made a big difference to... the rumours are going around if you get what I mean from years of past, now that proves it [the effectiveness of NBE] this year with 16 cars going straight into the first round.

“They’ve really controlled the championship now, they’ve really locked it down to being very equal and that was the whole idea of setting out to do it so that it was down to that pedal in the middle. “With Sodemo that was originally doing the engine, there wasn’t a lot of control with the engine coming through, so if you got a good one it was never controlled through the year. Whereas Neil Brown, they control all the time, they’re plugging in 24-7.”